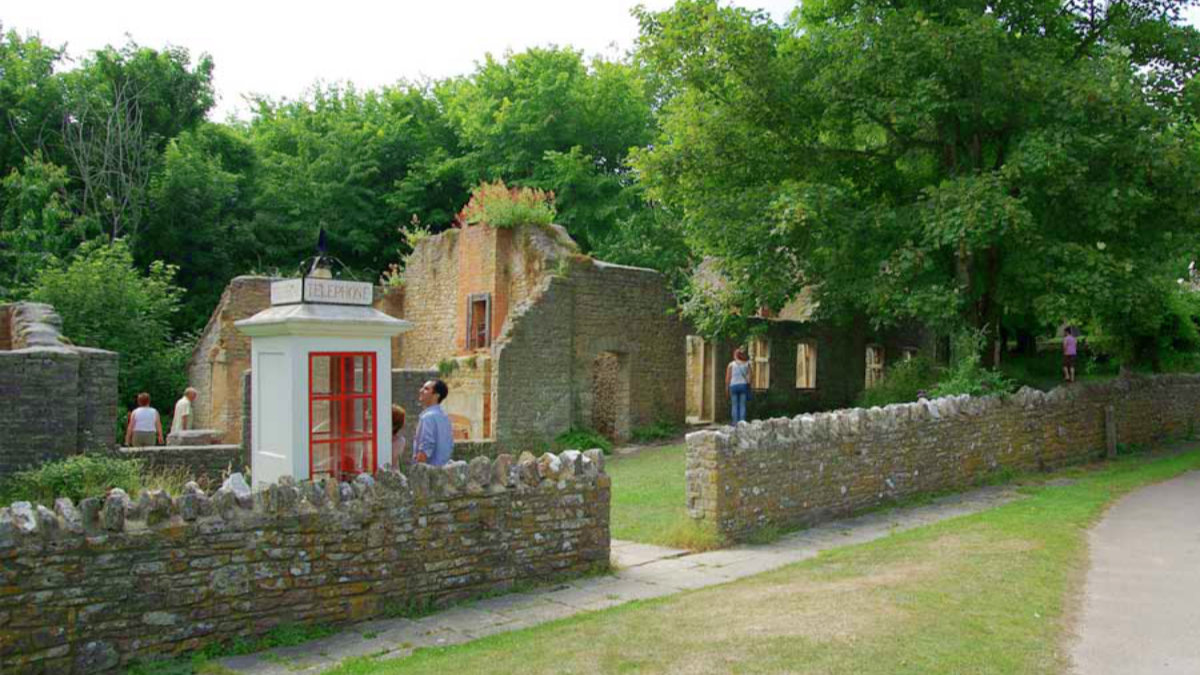 The lost village frozen in time!

Tyneham is a small village in south Dorset on the Isle of Purbeck, in close proximity to Worbarrow Bay on the Jurassic Coast; which was evacuated during World War II as a temporary measure by order of the War Office, to be used as a firing range and a training ground for troops; however, the village was not returned to the residents and in 1948 a compulsory purchase order was placed on the land.

This is a region that has seen many fishing and farming villages since the Iron Age, and Tyneham was no exception. Evidence of Roman occupation has also been found in the Tyneham Valley. According to the Domesday Book, “Tigeham” was part of the Lulworth estate, and during the time of William the Conqueror, his half-brother Robert of Mortain appears to have held the land. During later ages, there were tales of smugglers and shipwrecks, such as those that were evident in many such villages. For the most part, Tyneham remained unscathed by time, and the land passed to landed families from one generation to the next. At the time of the evacuation, the Elizabethan manor on the land was owned by the Bond family whose son should have inherited as next in line; however Tyneham became a ghost town while Mark Bond valiantly served his country, leaving service twenty years later as a general.

During modern times, the village consisted of a few cottages, a church and rectory, a post office, a farm, and by 1943, a telephone box was placed near the post office. The limestone Church of St. Mary dates back to the 13th century; and although many of the church artefacts were removed elsewhere for safety, the church managed to escape complete ruin; it has been repaired and made safe for the public, and at present is essentially being used as a museum. The Elizabethan manor house which existed in 1943 was used by the Ministry of Works for a while, and regrettably the building was taken down in 1967. Ironically, even though most of the village is in a state of ruin, the red and white telephone box remains virtually unscathed, and stands as a silent sentinel exactly where it was placed just weeks prior to the evacuation.

Tyneham is only one of an estimated 3,000 abandoned villages and hamlets in England. But whereas most were due to the confiscation of land by the gentry to create parkland on their estates, or devastation by plague, threat of invasion, or lack of natural resources, Tyneham appears to be the only evacuation of a village to insure the security of the country. A strange legacy has been left, on the one hand the village lays in ruin, with public indignation arguing that the village should be returned to the villagers; while on the other hand, due to the many years that have passed during this debate, the positive economic influence of having the military in the area has overshadowed such an outcome. The military retained control, but finally allowed the public to enter the village during the 1970’s, and with a concerted effort, the Army began to work with the Purbeck Heritage Coast project in establishing coastal paths and walks to be enjoyed by the public on a limited schedule. In addition, they have made some buildings safer and more accessible. The tank ranges are still used, which limits visiting times to holidays and most weekends.

There are still a few unhappy former residents left, who are unsatisfied with this arrangement; and one cannot blame them, as those individuals whose lives were spent in the peaceful bliss of their small ancient village had their lives torn asunder. However, there are those optimists who feel compelled to see the best in everything, and their view has been placed at the end of the Timeline that is on the two panels, on the walls of St. Mary’s Church in Tyneham, recounting the history of the village. The statement at the end conveys the following:

“Whether you agree with the Army’s continuing presence or not, the Tyneham Valley has escaped the unsightly tourism developments, only too prominent along the adjacent coastline. It has been untouched by modern intensive farming practices and is a haven for wildlife, supporting many rare and threatened species.”

The accompanying truism follows: “Tyneham is a Valley frozen in time.”

Tyneham is located on the Dorset coast, between Lulworth Castle and Corfe Castle. The nearest populated areas include Kimmeridge to the east and West Lulworth to the west.

There are sign-posts from Wareham and Corfe Castle, which also include information about village opening times and range walks (see details below).

You can use the following address in your sat nav or favourite mobile phone map app.

Tyneham and the Lulworth Range Walks are open most weekends and all main public holidays, except for the following weekends:

In addition to the weekends, the range walks are open every day during the following holiday periods – all dates are inclusive:

When is Tyneham village open?

Gate Notes: On conclusion of weekday firing, the gates to the range walks are opened as near as possible to 4.30pm on the Friday afternoon. However, this is dependent on completion of range clearance and weather. The range walks usually remain open until 8am on the Monday morning.

Mupe Bay warning: stay clear of the north half of the beach at Mupe Bay. Due to the possibility of rock fall, for safety, you are strongly advised to observe warning signs in the area.

Important Note, The opening dates and firing times are subject to last-minute change. Please phone 01929 404714 to listen to an answering machine that will give up-to-date access information to callers.